This page details how we determine which photometric objects match each spectrum. This task is nontrivial because the original runs used to target the SDSS spectra differs in many areas from the “primary” runs covering thus areas in the final data set. Even in those cases where the primary and targeting runs were the same, the photometric data has since been reanalyzed, and object detections and identifier have changed.

There are two versions of matching photometry for each spectrum: a positional match within 2 arcsec, and a flux-based match that tells you which object contributed the most light to the spectrum. These two matches differ about 0.5% of the time.

Position-based matches are the default matches. They are particularly important to use if you are primarily interested in the fiber fluxes, for example for spectrophotometry. In addition, if you are certain that your sources of interest are point sources, the position-based match is virtually always the right choice.

The position-based match simply finds the primary photometric object closest to the location of the spectrum within 2 arcsec. Note that for some number of objects, there is no such match (either the target object does not exist in the latest version of the imaging at that location, or the original target was a “sky” fiber).

In the CAS database, the objID of the position-matched photometric object is stored in bestObjID in the specObj tables.

The flux-based match is usually appropriate and typically more accurate for large, nearby galaxies. In particular, the latest photometric pipeline version deblends parent objects into children differently than the version used for targeting. Therefore, the spectrum we took of a galaxy might be significantly away from the location that we now deem to be the “center.” The “flux-based”matches recover many such cases.

The flux-based match is determined as follows:

In the CAS database, the objID of the flux-based matched photometric object is stored in fluxObjID in the specObj tables.

Below are shown two illustrative examples, one (A) a “success” of the flux-based matching, and the other (B) a “failure”.

In Example A, we targeted the HII region of a nearby galaxy (marked with a red star at center). This spectrum matched a detected object in the final photometric catalog within 2 arcsec, yielding a position-based match (marked with a blue cross). However, most of the light at that location is actually contributed by the galaxy as a whole, in particular the child whose center is shown as the green box. Thus, the “flux-based” match is to the child that basically corresponds best to the galaxy, and this is normally the match one would want. (Of course, sometimes you actually do just want the position-based match, which we therefore also provide.

In Example B, we targeted a galaxy (marked with a red star at center) that happens to be close to a very bright star. The position-based match correctly finds the match in the final photometric catalog. Because photo‘s deblender can misbehave in cases like this, most of the light from this galaxy is actually assigned to the bright star, not to the galaxy. Thus, the flux-based match is to the bright star, which is not appropriate. However, in cases such as this, the position-based match is of limited use in any case, because the photometry of the galaxy in question is clearly highly flawed.

Other cases exist where the flux-based match does unexpected things (such as for passing satellites accidentally targeted for spectroscopy). In most such cases, achieving a meaningful and scientifically useful match to a quality photometric object is in fact impossible.

Occasionally flux-based matching fails in cases where the photometry is actually correct. Typically this occurs for sources of unusual color that have close neighbors. 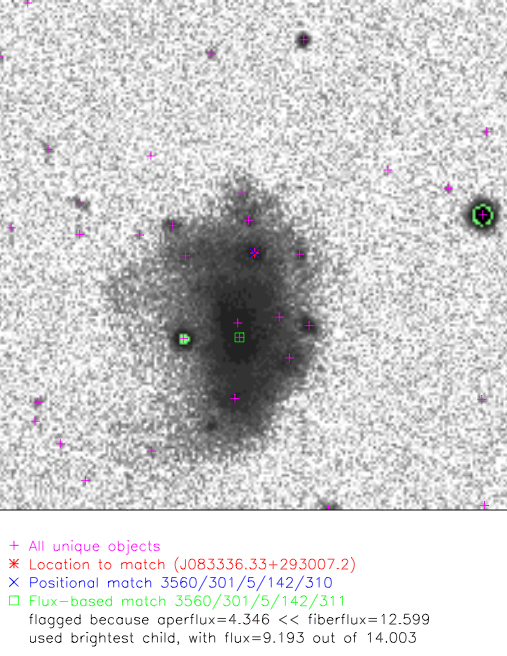 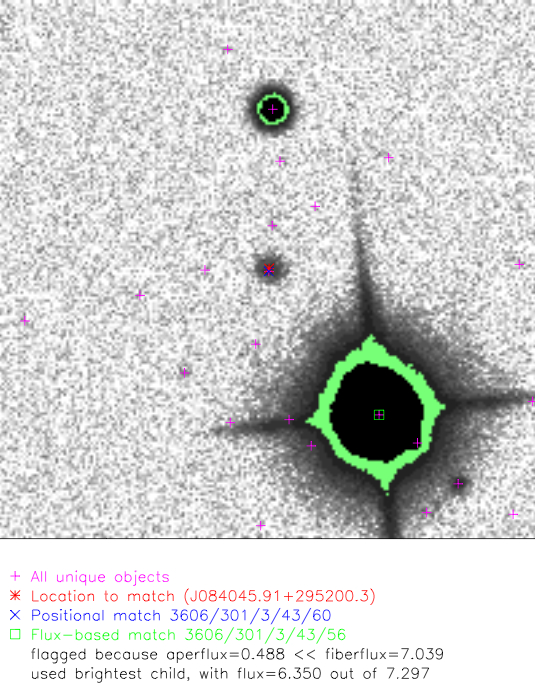 Example B
Back to Top