The basic stellar parameters — effective temperature and surface gravity — may be of scientific interest, and the abundances as determined in the parameter stage may also be of utility.

Use of parameters vs. abundances

At the stellar parameter determination level, ASPCAP fits for abundances [M/H], [C/M], [N/M], and [α/M] using a global fit over the entire spectrum. After the parameters are determined, abundances of individual elements are fit using portions (windows) in the spectrum with maximum sensitivity to the abundance of each element. Both the global and window abundances are provided.

We have found that [M/H] is closely correlated with [Fe/H]. For an overall metallicity, users may choose either one; however, note that [M/H] may be deriving its information from different elements in different temperature ranges. In addition, the calibrated [M/H] and calibrated [Fe/H] differ in that the former has an external calibration applied to it, while the latter does not. Both [M/H] and [Fe/H] have internal (temperature-dependent) calibrations applied to minimize scatter within clusters.

Various conditions trigger the setting of individual bits. For most quantities, there is a WARN condition and a BAD condition, where the latter means that the result is unreliable and the former means that it should be used with caution. To facilitate use, we provide summary STAR_BAD and STAR_WARN bits in addition to individual bits for different parameters and different conditions (as discussed further below). The STAR_BAD bit flags unreliable results: it is set if any critical individual bits in ASPCAPFLAG are set to BAD (specifically, if any of TEFF_BAD, LOGG_BAD, CHI2_BAD, COLORTE_BAD, ROTATION_BAD, or SN_BAD bits are set, or any individual parameter is near grid edge). The STAR_WARN bit is set if the WARN bits are set for Teff (TEFF) or log g (LOGG) (but not for [M/H], [α/M], [C/M], or [N/M]) or for WARNings related to CHI2, ROTATION, SN, or COLORTE.

In addition to the ASPCAPFLAG bits, several star level flag bits may also be relevant, as encoded in the STARFLAG bitmask. In particular, users may want to beware of stars with significant RV variation (as indicated by VSCATTER), which may be binary stars (although most cases of binarity are not expected to lead to stellar parameter issues, e.g., if the luminosity ratio is large). Users may also want to be more cautious about stars that are flagged as having potential issues from persistence in the detectors (PERSIST_HIGH, etc. bits in the STARFLAG mask).

Details of different bits in the ASPCAPFLAG are discussed below: 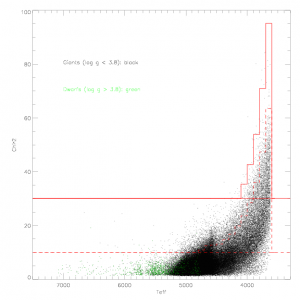 CHI2 (χ2) as a function of temperature for the DR12 sample

The synthetic spectra do not always provide good matches to real spectra because of possible issues with the line list and/or model atmospheres adopted, or because of a peculiar chemical composition (e.g., carbon stars, S-type stars, etc.). The quality of the match is characterized by the CHI2 value, which is shown for the entire DR12 sample as a function of temperature in the plot to the right. It is clear that cooler stars are fit worse than warmer, which is not unexpected given the larger number and greater strength of many absorption features at cooler temperatures.  Results at the coolest temperatures may be less reliable, judging from the quality of the matches to the synthetic spectra.  For DR12, we calculate the median CHI2 in temperature bins of width 100 K and set CHI2_WARN if CHI2 is greater than twice the median and CHI2_BAD if CHI2 if greater than three times the median in the temperature bin for each star.

APOGEE’s goal was to achieve S/N=100 per half-resolution element for all APOGEE stars. In the combined spectrum, this goal per half-resolution element corresponds to S/N~80 per pixel, since the combined (apStar) spectra are sampled at roughly three pixels per resolution element. The summary data files and CAS report the S/N per pixel. While the S/N goal was mostly met, there are a few stars that have lower S/N. Since the quality of the parameters and abundances depends on S/N, we set the SN_BAD bit in ASPCAPFLAG when the combined spectrum S/N<50 and the SN_WARN when S/N<70, based on analysis of calibration stars with a range of S/N.

There is a relation between the dereddened color of a star and its effective temperature. For each star, we calculate the photometric temperature from the relations of  González Hernández and Bonifacio (2009), the observed J-K color, and the expected reddening determined 2MASS and 4.5 micron photometry (using the RJCE method, Majewski et al. (2011). If the photometric temperature differs by more than 2000 K from the ASPCAP spectroscopic temperature, the COLORTE_BAD bit in ASPCAPFLAG is set; if it deviates by more than 1000 K than then COLORTE_WARN bit is set.

The technique used by ASPCAP — matching against a template library of synthetic spectra — is only valid to the degree to which stars are represented in the library. For DR12, the library spectra are all for non-rotating stars, and any stars with significant rotation will not be well matched. While most giants are expected to be slow rotators, the same cannot be said for main-sequence stars. An estimate of rotation is made during the radial velocity determination by comparing the width of the cross-correlation peak when cross-correlating the spectrum with best-matching template to the width of the autocorrelation of the best-matching template. When the ratio of the cross-correlation width to the autocorrelation width is greater than 2, the ROTATION_BAD bit in ASPCAPFLAG is set; when it is greater than 1.5, the ROTATION_WARN bit is set.

Quality of the ASPCAP Stellar Parameters

For dwarfs, the situation is significantly less clear, because of a variety of issues. As with other ASPCAP output, we do not provide calibrated parameters for dwarfs. 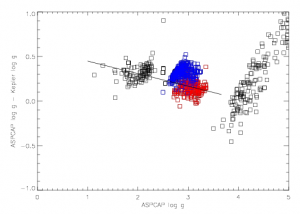 The scatter of the red giants around the calibration relation is relatively small, about 0.15 dex.

Surface gravities for dwarfs are significantly offset from that expected from stellar isochrones, in the sense that they are too small. Some of this may arise from the lack of consideration of rotation, but it is likely that there is more going on than just this. As with other ASPCAP parameters, we do not provide calibrated values for dwarfs.

We have recognized that the derived surface gravities are sensitive to the choice of the LSF used to construct the spectral libraries, so this is one possible issue for some of the surface gravity uncertainties.

Metallicities ([M/H]) have been validated through observations of globular and open clusters. These suggest that the raw ASPCAP metallicities have some small offsets that are characterized as a function of metallicity, and these offsets have been applied to giants.

Alpha-element enhancements ([α/M]) have been validated through observations of globular and open clusters. These suggest that the raw ASPCAP [α/M] seem generally reasonable. However, at the lowest and highest metallicities, there seems to be some degeneracy between [α/M] and [M/H], such that clusters at these metallicities have a larger spread in both quantities, with a correlation between the two.

Our understanding of the quality of the carbon abundances is limited, because we cannot make the assumption that carbon abundances are uniform within clusters, and we do not have an extensive homogeneous calibration sample. Note that, in addition to the parameter level [C/M], we also provide a [C/H] measurement from fits to windows sensitive to carbon abundance.

Our understanding of the quality of the nitrogen abundances is limited, because we cannot make the assumption that nitrogen abundances are uniform within clusters, and we do not have an extensive homogeneous calibration sample. Note that, in addition to the parameter level [N/M], we also provide a [N/H] measurement from fits to windows sensitive to nitrogen abundance.
Back to Top

While we characterize the spectra using seven parameters (effective temperature, surface gravity, microturbulence, overall metal abundance, alpha-element abundance, carbon abundance, and nitrogen abundance), there are likely to be significant degeneracies between some parameters in some regions of parameter space, e.g. for hotter stars where only CN and C I lines can be seen.