Image formation for the MARVELS instrument

The Physics behind the MARVELS Instrument

A Powerpoint presentation explaining the physics behind the MARVELS instrument is available in three parts:

MARVELS is designed to calculate stellar radial velocities by measuring the movements of stellar lines across the fringe pattern created by an interferometer. The interferometer provides high resolution information about the movement of the spectral lines.

The Basic Physics of MARVELS

Below are explanations of a few major diagrams excerpted from the presentation. 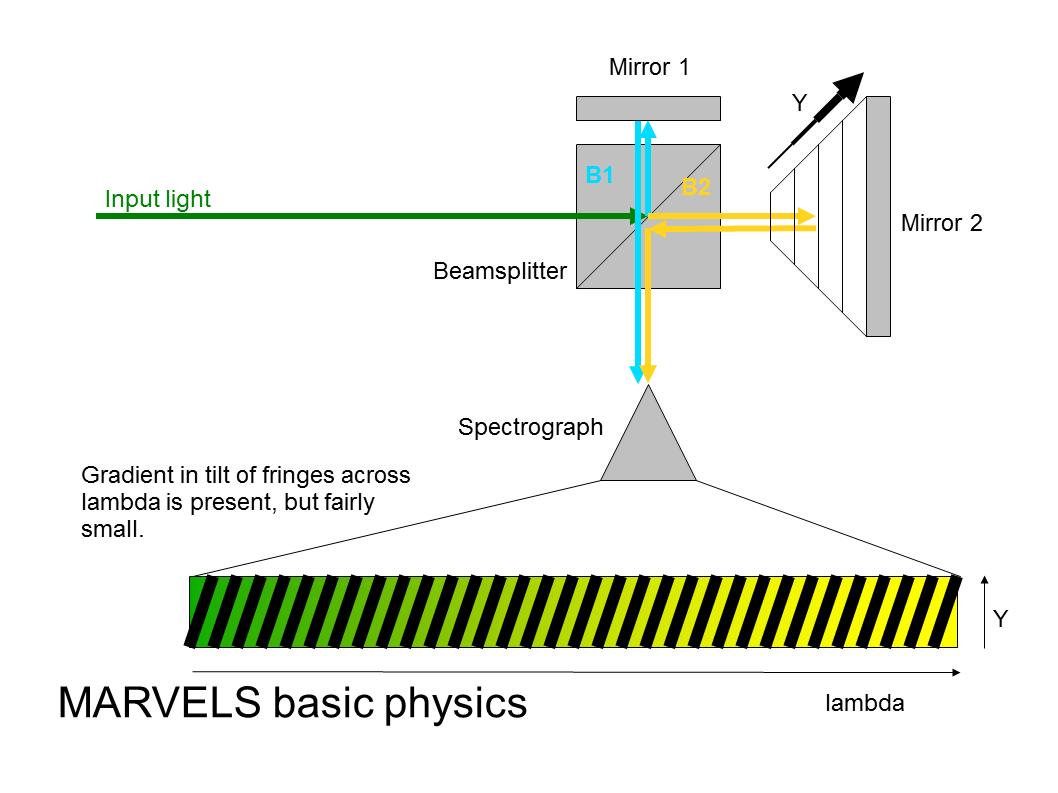 Beams of starlight enter the interferometer, split, reflect off of two different mirrors, then recombine.

White starlight from the telescope enters the interferometer, which consists of a beamsplitter and two mirrors mounted on an optical bench.  Half of the beam reflects off of mirror 1, which is completely vertical.  The other half reflects off of mirror 2, which is slightly tilted back from the beamsplitter.  The beams then recombine at the exit of the beamsplitter.  The tilt of mirror 2 causes the optical path length of the beam reflecting off mirror 2 to vary in y (height above the optical bench).  So, at a given wavelength, constructive and destructive interference will take place alternately as y increases.  Note that the beam exiting the interferometer must be passed through a spectrograph in order for the detector to record the interference pattern at each wavelength (without the spectrograph, all the interference patterns would appear on top of each other).  Note that the spectrograph need not be high resolution;  the reason will be discussed below. 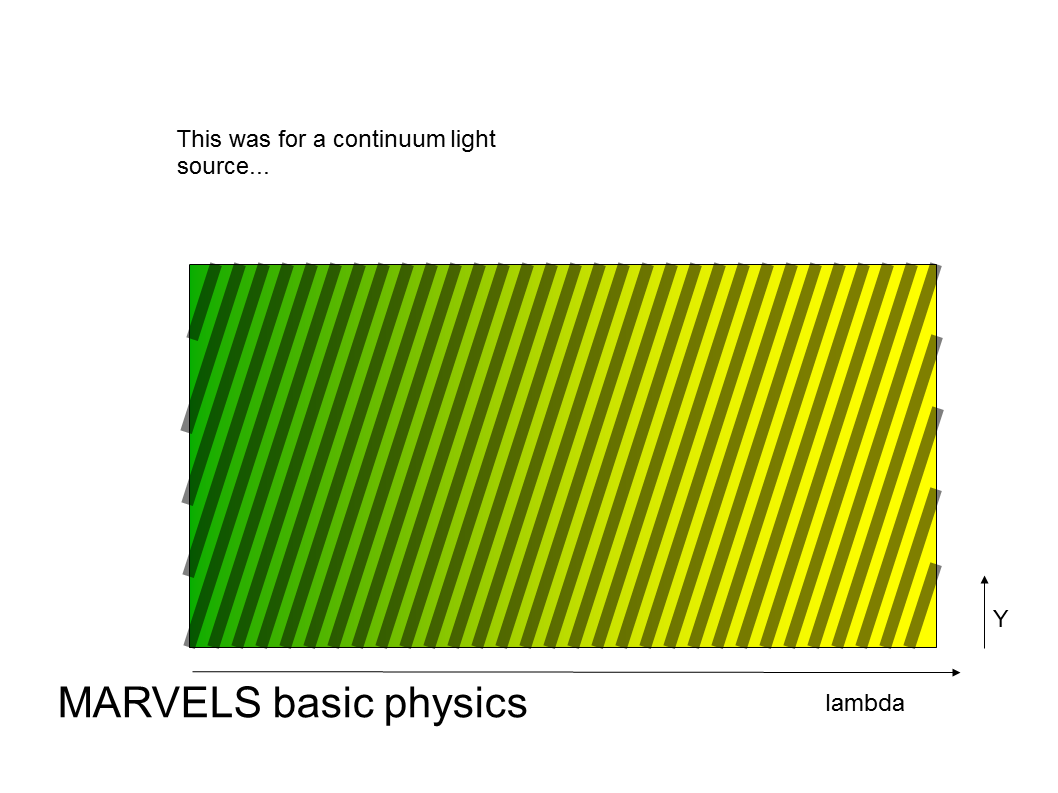 The combination of optical path differences and wavelength changes causes a diagonal pattern of constructive and destructive interference to appear.  We call this pattern the, “interferometer comb,” and any spectrum which has the interferometer comb overlaid is called a, “fringing spectrum.”  The diagrams above assumed completely white light from the telescope.  However, the next diagram shows the introduction of light containing absorption features in the spectrum. 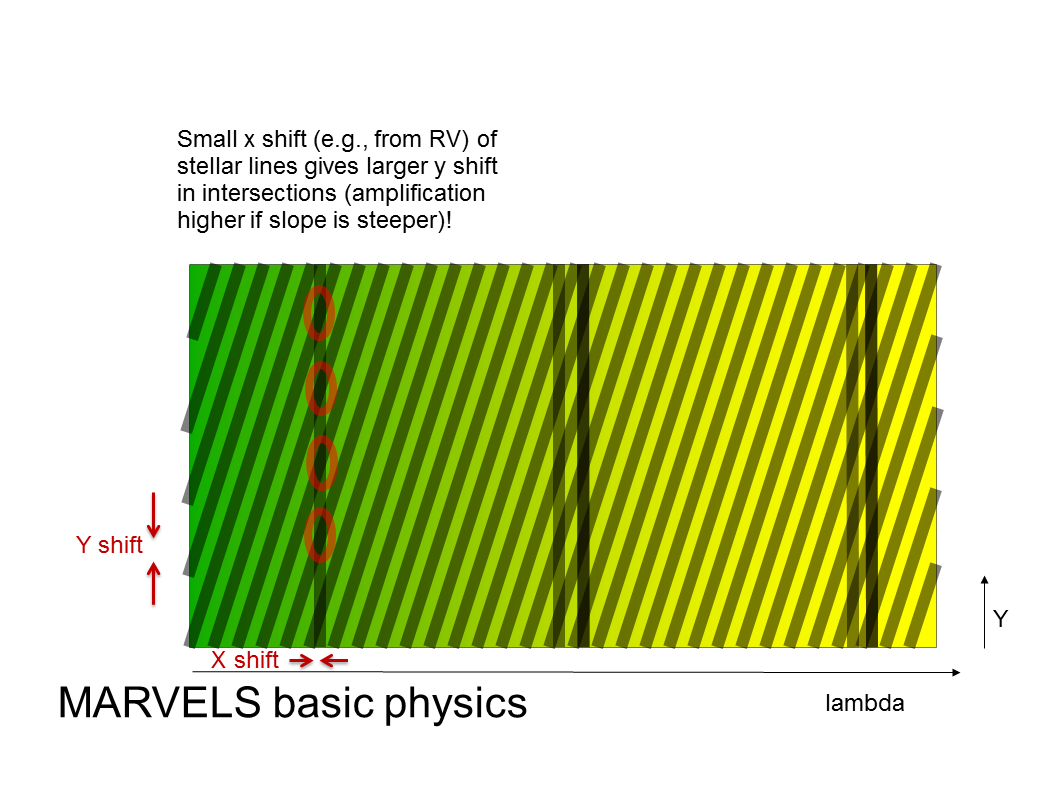 Small shifts in the x position result in amplified and more easily measured shifts in y. 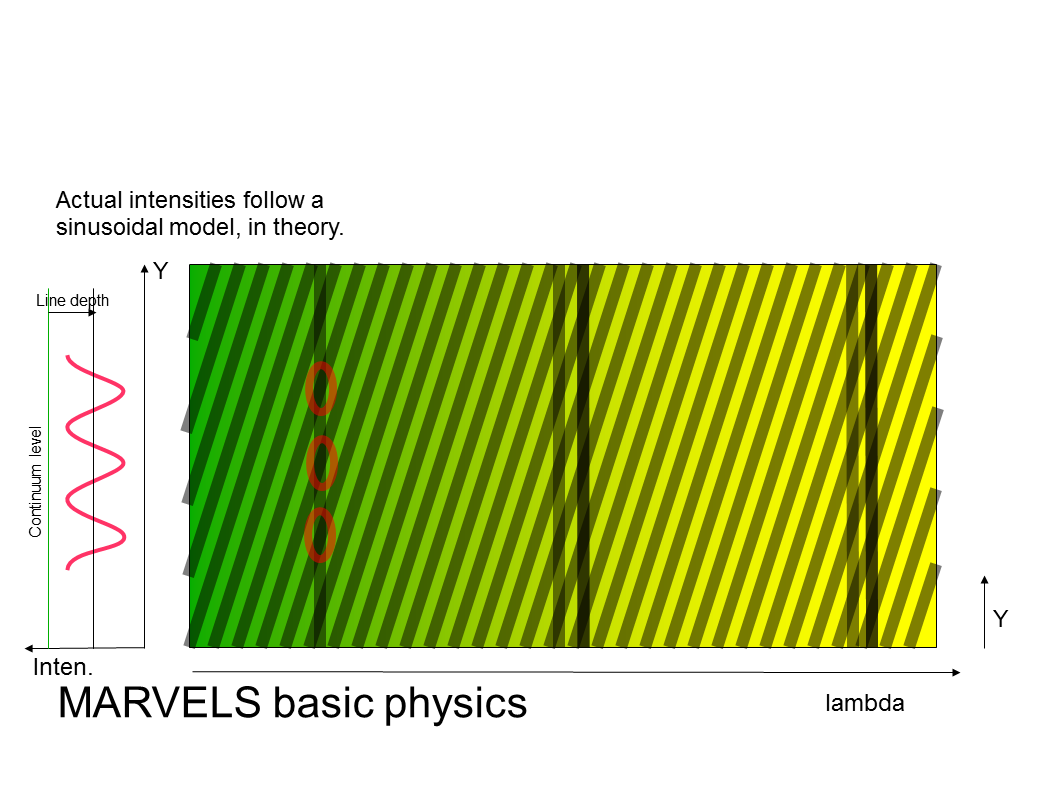 The shift in Y is gradational, rather than discrete, and is modeled with a sinusoidal function the parameters of which idicate the radial velocity change.

Note that the diagonal pattern of constructive and destructive interference is not quite as stark as these simple diagrams show.  In fact, there is a gradual change between completely constructive and completely destructive interference peaks.  The actual variation in intensity with y (at a given wavelength) should be sinusoidal.  Therefore, we can measure the movement of the intersections by fitting a sinusoidal model to the intensity data;  the change in the phase of the sinusoid from epoch to epoch encodes the movement of the intersections, and hence, the radial velocity change.

MARVELS radial velocities (RVs) are differential measurements, based on the shift of a star’s fringing spectrum at the current epoch relative to one from the template epoch. MARVELS observes individual patches of sky called fields. A MARVELS field consists of 60 stars. Each field is visited multiple times, roughly 20 to 40 epochs based on the field. A MARVELS image is composed of 120 individual spectra (2 for each star). The RVs for each star were derived based on multiple epochs (images) of fringing spectrum observations.  DR11 used a preliminary version of our MARVELS DFDI (Dispersed Fixed-Delay Interferometry) pipeline, which is based on software from earlier DFDI prototype instruments (e.g., Ge et al. 2006). DR12 used a pipeline which only analyzed the collapsed 1-D spectrum, but calibrated the spectrograph dispersion on a more frequent basis.  For a more complete description of the MARVELS project please refer to the MARVELS Project Overview.