Here we compile some other quantifications about the quality and nature of the SDSS images.

Most of the discussion below covers the overall quality of SDSS data. In order to evaluate the quality of individual fields, please see our description of image quality flags.

Seeing and sky brightness affect both the completeness of the SDSS and the accuracy of its star/galaxy separation.

Seeing is given in SDSS photometry data as the psfWidth parameter. That parameter is defined as the single-gaussian FWHM that has the same noise effective area as the SDSS photo pipeline double-gaussian fit to the PSF. The sky error contribution to a PSF magnitude will be proportional to this effective number of pixels, which makes this measure useful for quantifying the completeness of point sources at the faint limit.

The effective number of pixels neff is defined as inverse of the sum of the squares of the normalized 2-Gaussian PSF, over all pixels. Then psfWidth in pixels is:

and the published values are converted to arcseconds. The actual FWHM of the 2-Gaussian PSF is typically around 0.85 times the psfWidth value. 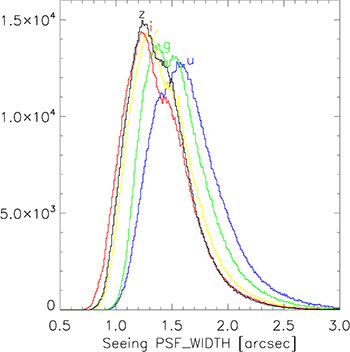 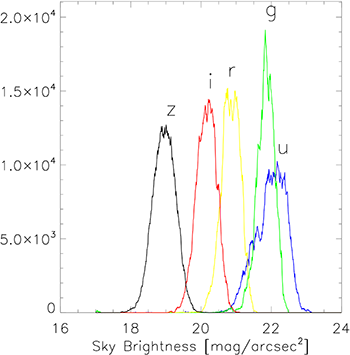 Here are the quantiles for seeing for SDSS observations in each filter (FWHM in arcsec):

Here are the quantiles for sky brightness for SDSS observations in each filter (magnitudes per arcsec2):

Depths of the SDSS photometric survey 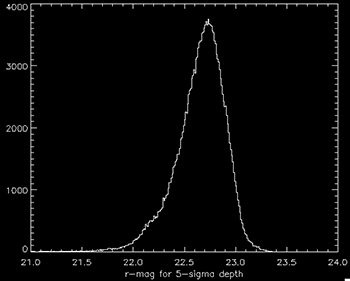 The median 5-sigma depth for SDSS photometric observations is:

This is based upon the formal errors from photo PSF photometry on point sources.

The 5-sigma point source depth can be accurately estimated per SDSS frame using a simple model of seeing, sky brightness and airmass as follows:

The overall scaling coefficients, A, have been determined empirically from the catalog errors. The atmospheric extinction coefficients, k, are from Padmanabhan et al. (2008).

The numbers per field needed for this are available in the public window_flist file, available through the Science Archive Server (SAS) and documented on the window_flist page of the SDSS Data Model, where the units of PSF_FWHM are in arcsec.

This formula predicts the 5-sigma depth to an RMS accuracy of [12%, 4%, 4%, 5%, 7%] in each band, which is quite good while ignoring atmospheric variations, flat-field vectors, mirror coating degradations and PSF shape variations.

Below are the same quantiles of depth converted into units of magnitudes:

The image above shows a histogram of the photometric depth of SDSS imaging in the r-band, which peaks at r = 22.70.

Completeness of the SDSS photometric survey

We have determined the completeness of the SDSS photometric survey by comparing the number of objects found by the SDSS pipeline to the number found by the COMBO-17 survey in a region of sky that has been scanned by both surveys, and in a second comparison with data from observations of a CNOC survey field. While the comparison was carried out for DR1 data, the DR2/DR3 data are not significantly different. 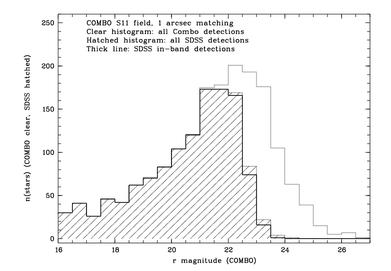 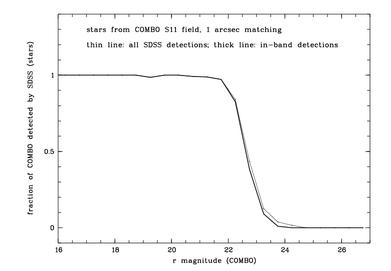 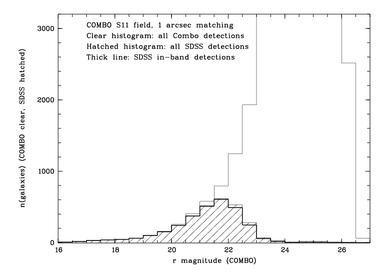 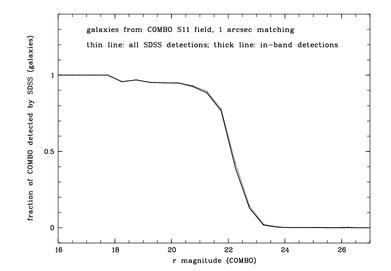 Note that COMBO-17's multicolor classification starts to become incomplete for stars at about one magnitude fainter than SDSS. Therefore, the SDSS 50% completeness is slightly brighter than indicated by this plot.

The SDSS photometric pipeline performs a morphological star/galaxy separation. The quality of this separation is therefore intimately related to the seeing and sky brightness. Photo's classifications have been tested against those of the COMBO survey (which effectively uses low-resolution spectroscopy for star/galaxy separation) in a region of the sky that both surveys have scanned. While the comparison was carried out for DR1 data, the DR2/DR3 data are not significantly different.

We assess the quality of the SDSS star/galaxy separation using the COMBO S11 field which corresponds to SDSS run 1140 camcol 5 fields 151-154, run 1231 fields 42-25 camcols 5-6. We assume the COMBO classification is correct and determine which fraction of SDSS-detected objects is classified identically by SDSS. 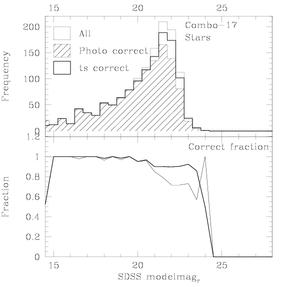 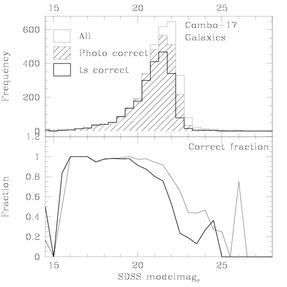