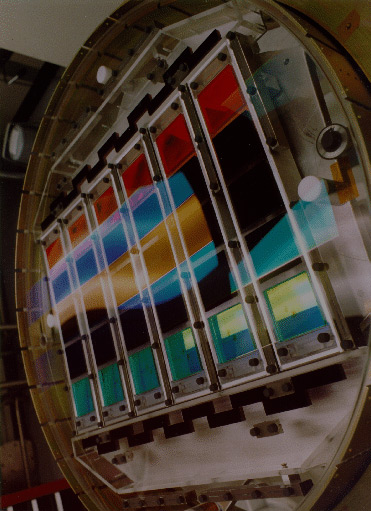 SDSS Imaging Camera. This camera collected all of the data for the SDSS Legacy Imaging. It is made up of 30 CCDs each with 2048×2048 pixels. The CCDs are arranged in six columns of five. The SDSS r, i, u, z, and g filters cover the respective rows of the array. The survey operated the instrument in a drift scan mode: the camera slowly reads the CCDs while the telescope moves along great circles on the sky so that images of objects move along the columns of the CCDs at the same rate the CCDs are being read. As an image of an object moves along the column of the CCDs, a CCD in each row collects data on that object. Therefore, the camera produces five images of a given object, all from the same column of CCDs, one from each CCD in that column. It takes an object 54 seconds to move from the beginning of a CCD to the end, so the effective exposure time in each filter is 54 seconds. The Camera is currently stored in the basement of the Smithsonian Museum in Washington, D.C. It is considered an artifact of scientific importance.