Demonstration of the advances made in cosmology in the last decade. Stage-II experiments represent the experimental status in 2010, including WMAP, JLA Supernovae, and low redshift measurements of the baryon acoustic oscillations. Stage-III experiments represent the current status of cosmology experiments, as described below. Central values and 68% contours for each of the parameters describing expansion history and growth of structure in a cosmological model that allows for free curvature, neutrino mass, and constant equation of state for dark energy.

The SDSS Baryon Acoustic Oscillation (BAO) and Redshift-Space Distortion (RSD) measurements reveal an uninterrupted view of the cosmos over the last 11 billion years. This composite sample is the most constraining of its kind and allows a comprehensive assessment of the cosmological model. These final measurements are broadly described in the final eBOSS press release.

Contemporaneously with the BOSS and eBOSS surveys, which have fostered the development of the BAO and RSD techniques over the last 10 years, maps of the Cosmic Microwave Background (CMB) produced by the Planck satellite have given insight into the state of the Universe as it was during the recombination era. Large weak lensing surveys such as the Dark Energy Survey (DES) have measured cosmic shear to constrain the local matter density and amplitude of fluctuations. Type Ia supernovae (SNe Ia) measurements remain the most effective way to constrain expansion history at redshifts below $z<0.3$, with some of the latest results coming from the Pantheon sample of SNe Ia.

In the final eBOSS cosmology analysis (2020) , we present the cosmological model and its observational signatures. We use the BAO and RSD data from SDSS, the Planck CMB data, SNe Ia from the Pantheon sample, and weak lensing and clustering data from DES to provide the tightest available constraints on the parameters within the standard ΛCDM model and its extensions. In the brief summary of these results presented on this web page, we denote the Planck CMB data as `CMB T&P' when no lensing is used, `CMB lens' when only the lensing is used, and `Planck' when all data are used. We refer to the DES weak lensing data as `WL' and we refer to the full DES weak lensing, galaxy-galaxy lensing, and clustering data as `DES'.

We begin with a discussion of BAO measurements in the context of the cosmic expansion history. We demonstrate that BAO are able to constrain single-parameter extensions to a ΛCDM cosmology that can not be constrained by CMB alone, and that BAO data are unique in their ability to provide robust, consistent measurements of the current expansion rate, H0. We then discuss the insight offered by RSD measurements, showing that the RSD, CMB, and weak lensing measurements present a history of structure growth that is best described by a standard ΛCDM cosmology and a GR model for gravity. Finally, we present the cosmological model that best describes the available data and how constraints on that model have advanced in the last ten years. 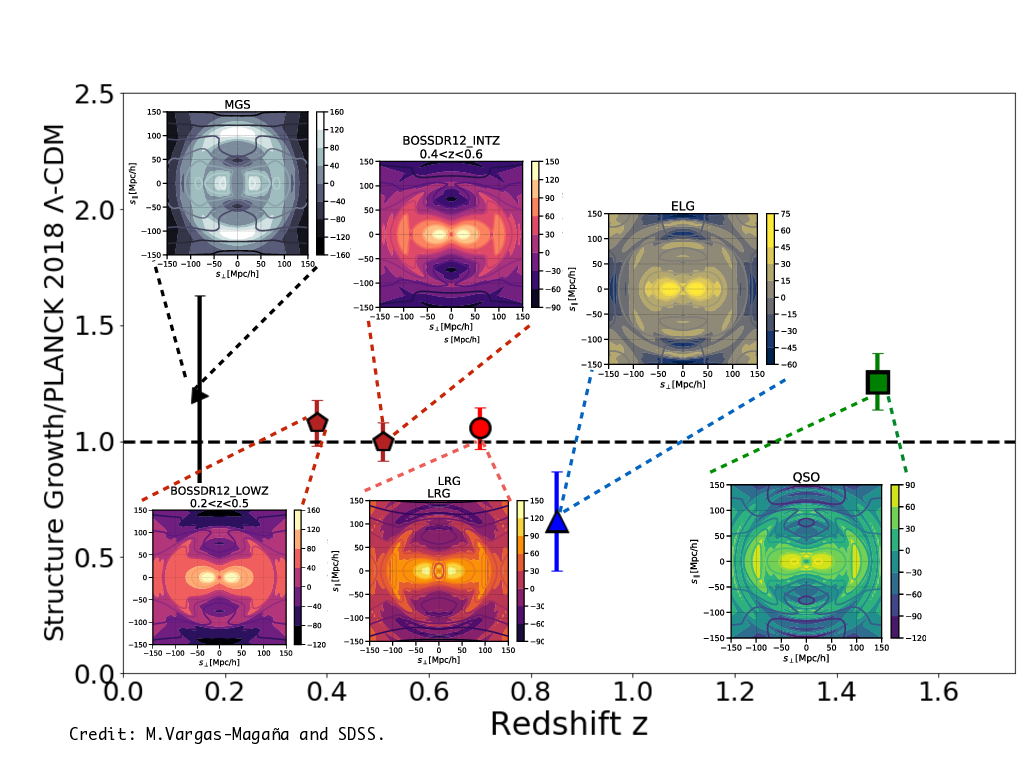 RSD measurements from SDSS, normalized by the Planck ΛCDM prediction. The insets demonstrate the two-dimensional correlation function that captures the anisotropic clustering signal.

We use the final BAO constraints of background expansion history to measure curvature, dark energy, neutrino mass, and the local Hubble expansion rate. These BAO measurements are shown in the figure of Hubble Diagram residuals above, covering 11 Gyr of the history of the Universe.

Detecting dark energy with BAO: Constraints on the matter and dark energy components of the Universe while allowing for free curvature allow us to assess the impact of the SDSS BAO measurements. BAO measurements alone lead to a constraint on the dark energy density with an 8 sigma confidence detection.

Low-z and high-z BAO: SDSS offer a unique combination of galaxy and quasar BAO at z<=1.5 along with the Lyman-alpha forest BAO at z=2.33. With complementary degeneracy directions, low and high redshift measurements, when combined, allow precise constraints on both the matter density and the dark energy density.

Local expansion history estimates: The BAO data allow robust, consistent measurements of H0 that are insensitive to the strict cosmological priors in CMB-only estimates. BAO estimates are insensitive to the use of CMB anisotropies altogether under the assumption of a ΛCDM cosmology, and including the Big Bang Nucleosynthesis constraints from primordial deuterium abundance. Under all assumptions, the H0 values from BAO are roughly 10% smaller than those from the Cepheid distance ladder and strong-lensing time delays, and geometric distance to MASERs. The consistency of the BAO results highlights that the `H0 tension' can not be restricted to systematic errors in Planck or to the strict assumptions of the ΛCDM model.

We use the final RSD constraints from the SDSS Main Galaxy Sample (MGS), BOSS, and eBOSS programs to explore the impact of structure growth measurements on the cosmological model. These RSD measurements are shown above in the Hubble Diagram residual plot, covering the last eight billion years in the history of the Universe.

Consistency of General Relativity (GR) in predicting the rate of structure formation: RSD and weak lensing allow us to estimate the current amplitude of matter fluctuations. We find a picture of structure growth that is consistent with extrapolations of the amplitude of the measured CMB power spectrum under a GR model for gravity and a ΛCDM model for cosmic expansion.

We combine the Planck (including lensing), Pantheon SNe Ia, SDSS, and DES data to determine the best fitting cosmological model. The SDSS data consist of the BAO+RSD measurements, while the DES data consist of the cosmic shear, galaxy clustering, and galaxy-galaxy lensing data (i.e., 3×2pt).

Bounds on neutrino mass: The combined analysis allows very tight constraints on the summed mass of the three neutrino species, with an uncertainty that is almost equal to the lower bound of 60 meV allowed by neutrino oscillation experiments. Using the Planck data as a baseline, the largest improvement in precision comes from the addition of the SDSS BAO measurements, while the RSD improve the precision by another 23%.

Role of SDSS in advancing cosmology over the last decade: We use a model with free curvature, neutrino mass, and constant equation of state for dark energy to assess the impact of the current, Stage-III generation of dark energy experiments relative to the Stage-II dark energy constraints that were possible when BOSS was achieving first light one decade ago. We define Stage-II experiments in a manner similar to the Dark Energy Task Force, specifically including WMAP, JLA Supernovae, and low redshift measurements of the baryon acoustic oscillations. The posterior volume spanned by w, curvature (Ωk), H0, fluctuation amplitude (σ8), and neutrino mass decreases by a factor of 40 when adding the SDSS BAO and RSD data to Stage-II experiments. The biggest impact from SDSS is in improved constraints on Ωk, H0, and neutrino mass. The volume decreases by another factor of 25 when adding Planck, Pantheon SNe Ia, and DES data, for a total improvement of three orders of magnitude in the precision in this five-dimensional parameter space. 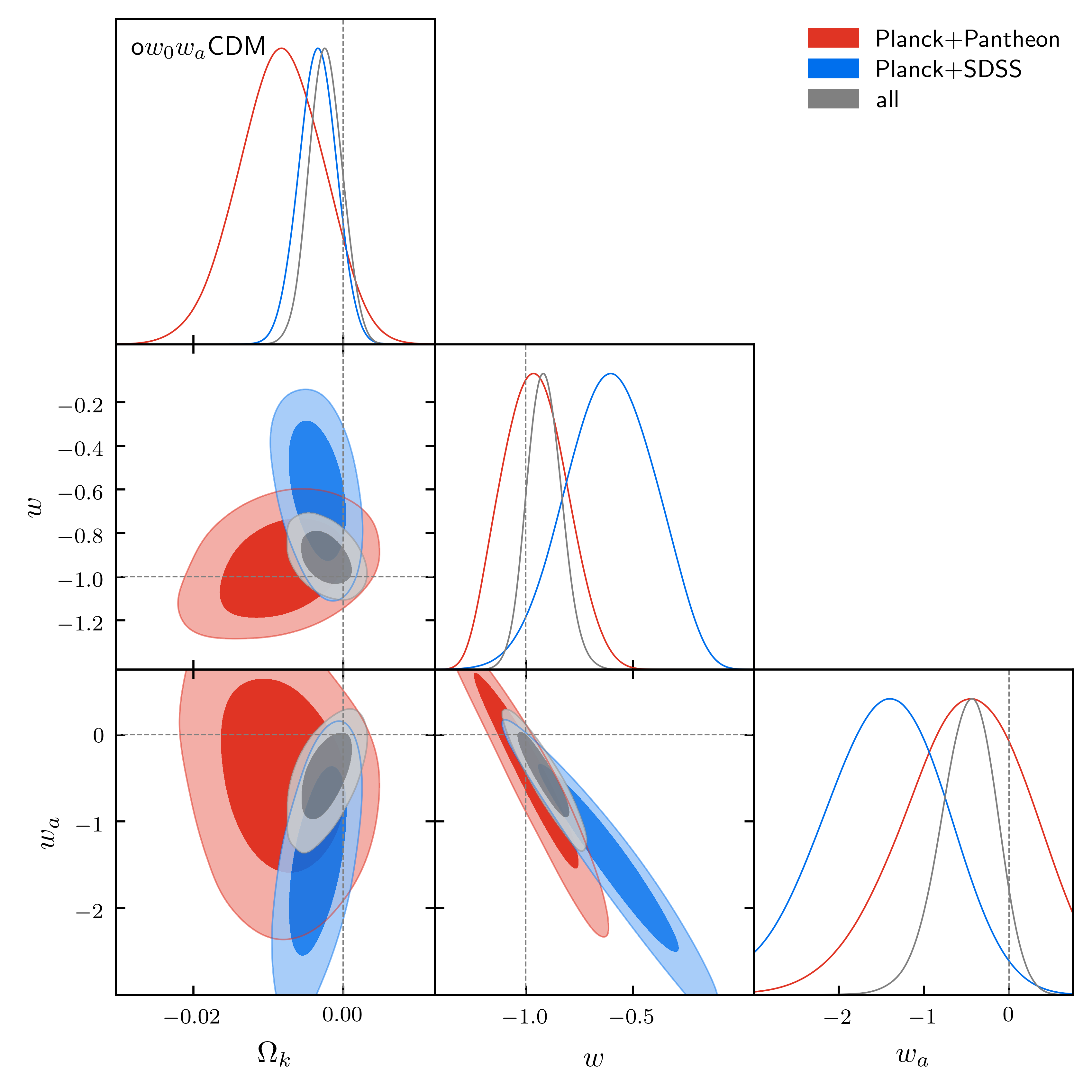 Summary cosmological model: The tightest constraints on the cosmological model are found when combining current measurements of the expansion history, CMB, and growth of structure. This combination reveals a dark energy density measured to 0.7% precision under an assumed ΛCDM model. We find ∼1% precision estimates on the dark energy density (ΩΛ), H0, and σ8 regardless of cosmological model, with a preference for a cosmological constant and a flat Universe under all models explored. The complementarity of BAO and SNe Ia data allow tight constraints of curvature and the dark energy equation of state, resulting in a Dark Energy Task Force Figure of Merit of 92. The full suite of cosmology constraints presented in the final eBOSS cosmology analysis (2020) are presented in the table below.