Data Release 13 (DR13) is the third spectroscopic release from the Apache Point Observatory Galactic Evolution Experiment (APOGEE/APOGEE2). DR13 releases the same data as were previously released in DR12, but with modifications to the processing, analysis, and calibration.

By operating in the infrared portion (H-band, details of wavelength coverage) of the electromagnetic spectrum, APOGEE is better able to detect light from stars lying in dusty regions of the Milky Way than surveys conducted in the optical, which makes this survey particularly well-suited for exploring the Galactic disk and bulge. APOGEE’s high resolution spectra (R~22500) provide detailed information about the properties of individual stars. DR13 provides APOGEE’s processed infrared spectra, as well as catalogs of radial velocities, stellar parameters, and abundances derived from these spectra.

The APOGEE survey started in September 2011, and DR13 includes all APOGEE observations through July 2014 (encompassing all of SDSS-III). By design, spectra for most of the survey stars are integrated over multiple visits, with at least one visit separated by at least one month, to enable the identification of binary stars through detection of radial velocity variations.

In DR13, data for all stars observed during SDSS-III/APOGEE-1 are being re-released using improved data processing and abundance pipelines. Included are 12,000 targets observed while commissioning the APOGEE-North spectrograph (most of these objects were re-observed with the spectrograph in its final, SDSS-III survey configuration) and ~900 stars that were obtained using the NMSU 1-m telescope at Apache Point Observatory, using a fiber link to the APOGEE instrument. Spectra of brighter stars can be taken with the 1-m telescope allowing observations of calibration objects, and various ancillary program objects.

The data released in DR13 are the same data as were previously released in DR12. However, the processing and analysis have been modified in several ways:

The coverage diagrams below show the areas of sky with APOGEE data in DR13. The figures show the Milky Way, centered at the center of the Galaxy. APOGEE pointings (areas of observations) are shown a small circles. 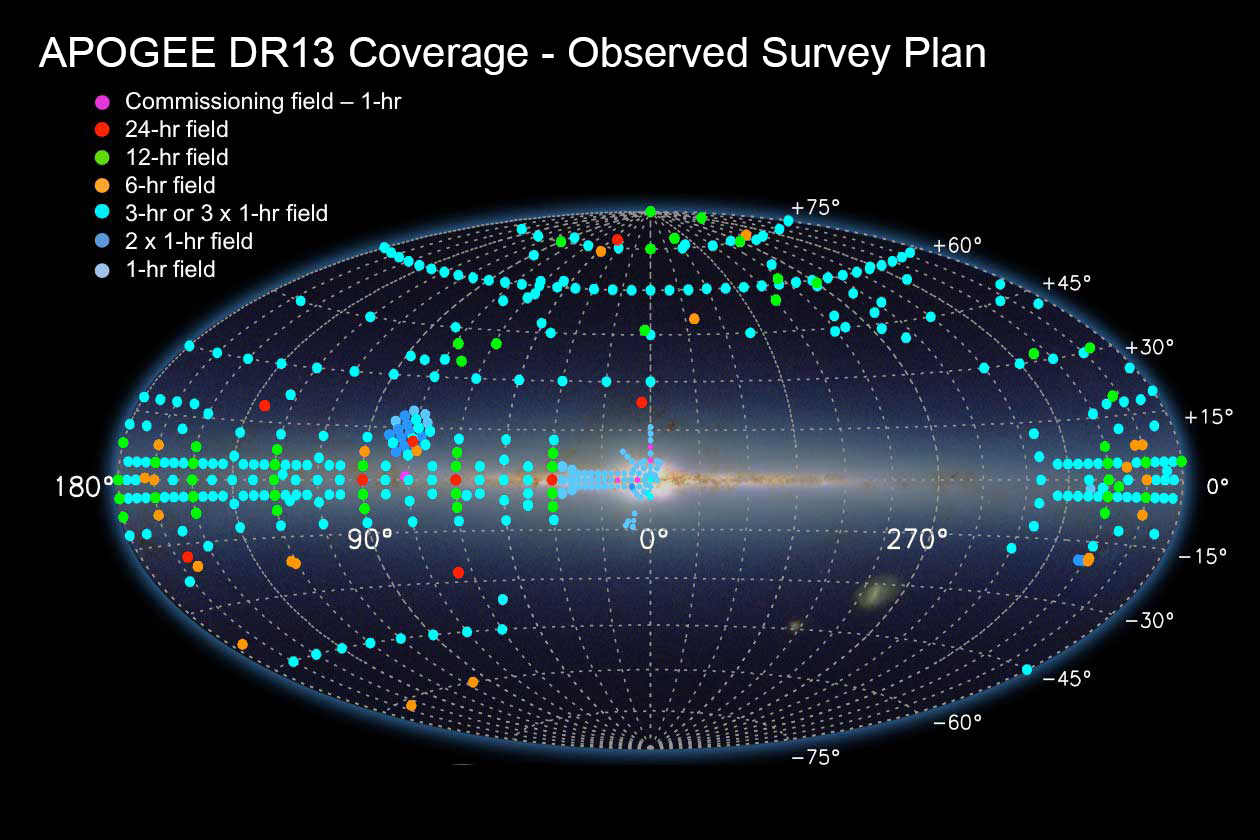 Distribution of observed APOGEE fields, color-coded by the number of approximately 1-hr visits. 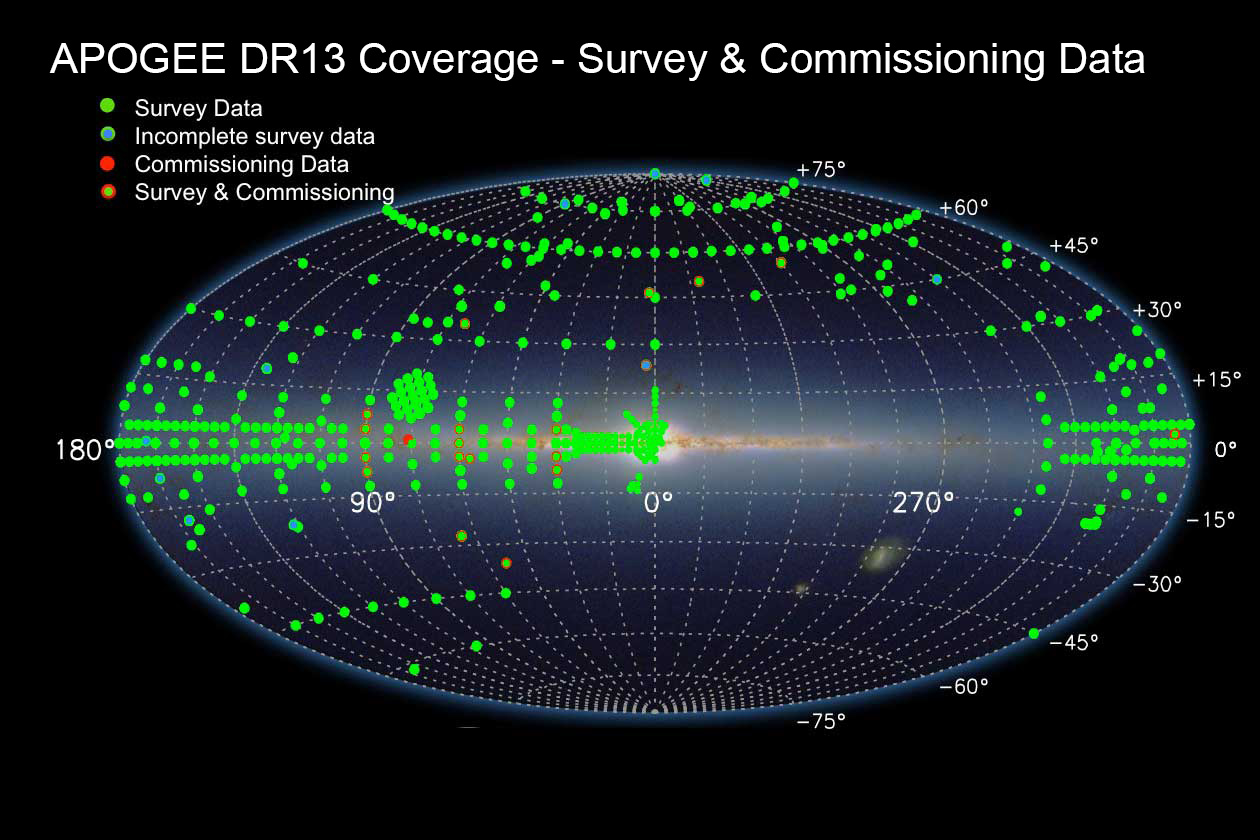 APOGEE target information and derived radial velocities, stellar parameters, and abundances are loaded into the Catalog Archive Server (CAS) database.  This contains a number of ways of interfacing with the database, including low-level SQL access through the CasJobs interface that allows you to save and analyze all your search results.

Summary FITS files containing the derived radial velocities, stellar parameters, and abundances for all APOGEE stars, as well as all raw and processed APOGEE data are available from the APOGEE Science Archive Server (SAS), including all directories and files listed in the Data Model.
The Science Archive Webapp provides a searchable interface for infrared spectra, and includes an interactive view of infrared spectra, and a data download facility (supports both rsync and wget):

The SkyServer Explore tool provides a quick way to find APOGEE spectra for a desired object. Quick Look shows an image and spectrum for all SDSS objects. For objects with APOGEE spectra, the tool includes an APOGEE section. The APOGEE section of the Explore tool shows a composite spectrum, radial velocities, and derived stellar atmospheric parameters, and gives links to further data, including the spectrum as a FITS file.

All APOGEE catalog data are available through the search tools of SkyServer. The Infrared Spectroscopy Query Form lets you search for APOGEE catalog objects by position, spectral classification, redshift, and other constraints in spectroscopy and/or imaging. SQL Search lets you create your own search using the SQL database programming language; see the SkyServer SQL Tutorial to learn how to write SQL queries.

Broadly speaking, the main APOGEE data products released in DR13 are the outputs of two software pipelines. The data reduction pipeline delivers extracted, one-dimensional, calibrated spectra as well as derived radial velocity information. Those interested in working with APOGEE spectra should be aware of instrumental and reduction-specific features visible in the data. Users of the released spectra are strongly advised to visit the Using APOGEE Spectra page.

The following pages give detailed information about various aspects of APOGEE.

The following pages describe the steps in the APOGEE software pipelines, and the files created at each step.

APOGEE Target Information
describes the way in which APOGEE targets are chosen (targeted), and how this is documented in the target flags.
APOGEE Visit Spectra Reduction
gives information about how individual visit spectra are observed, processed and stored.
APOGEE Visit Spectra Combination
gives information about how the combined spectra for each star are created and stored, including information about the derivation of radial velocities.
APOGEE Stellar Parameter and Abundance Determination
describes how the stellar parameters and abundances available in APOGEE spectroscopic catalogs are derived.
APOGEE Caveats
is a running list of known issues with the DR13 release.

These web pages attempt to describe the key features in APOGEE data, but they must necessarily be somewhat concise. For the most in-depth discussion of the APOGEE survey and data analysis, users should consult the APOGEE technical papers, which include:

The APOGEE overview paper
Majewski et al. 2015 discusses the scientific motivation for the survey, as well as the survey requirements and the choice of survey field placements that are implied. It describes survey operations, summarizes the level to which requirements are met, and references the data releases. It also introduces the follow-on APOGEE-2 survey.
The APOGEE DR12 data paper
Holtzman et al. 2015 describes the DR12 release of SDSS-III/APOGEE data. While there are some modifications for DR13, it presents a general discussion of the calibration of the stellar parameters and abundances, and validation of these relative to independent measurements. It also presents the methods by which APOGEE data can be accessed, and discusses some details of the files and databases, including important information to users about what quantities are stored where, uncertainties, and potential issues.
The APOGEE instrument paper
(Wilson et al. 2016, in prep) discusses the technical details of the instrument itself, and presents some low level instrument performance data.
The APOGEE target selection paper
Zasowski et al. 2013 discusses the target selection for main survey and APOGEE-1 ancillary science projects. An expanded discussion of the Kepler field targeting can be found in Pinsoneault et al. 2014.
The APOGEE data reduction paper
Nidever et al. 2015 discusses the data reduction pipeline, describing how the raw data are analyzed to produce reduced, calibrated spectra. It also presents additional instrument performance data (flats, darks, LSF, persistence, etc.), It also discusses the measurement of radial velocities and their quality.
The APOGEE/ASPCAP paper
Garcia Perez et al. 2016 presents an outline of how the spectra are processed and analyzed to produce stellar parameters and abundances. It demonstrates validation of the overall method using recovery of parameters/abundances from simulated data, and discusses uncertainties that are introduced by real-world issues: S/N, issues related computational efficiency, variation and uncertainty of the LSF, and issues involving the loss of information under sky lines. It presents some basic tests of the methodology from very-high-resolution observations of some well-studied stars (FTS stars).
The APOGEE linelist paper
Shetrone et al. 2015 presents the details of how the H-band linelists, a critical component for ASPCAP, were developed.
The APOGEE model atmospheres paper
Meszaros et al. 2012 discusses details of the model atmospheres that were used for the final APOGEE-1 analysis, which is included in DR13.
The APOGEE spectral grids paper
Zamora et al. 2015 presents how the spectral synthesis was done, documents the libraries that have been used, and investigates the sensitivity of the result to the choice of synthesis code and model atmospheres.
The APOGEE DR10 calibration paper
Meszaros et al. 2013 discusses calibration of stellar parameters that were released in DR10. It is superseded by the APOGEE DR12 data paper ( Holtzman et al. 2015 ).

Additional technical papers on APOGEE may be forthcoming.