As described in Wake et al. (in prep) we undertook an extensive optimization exercise to simultaneously determine the selection criteria and the IFU size distribution given the details of the MaNGA instrumentation. Described below are the results of that optimization applied to the selection of the three main MaNGA samples. All the main target galaxies are selected using the reprocessed NSA photometry and are restricted to lie within the NYU-VAG LSS footprint as described here. Throughout we use photometric quantities defined using elliptical Petrosian photometry. 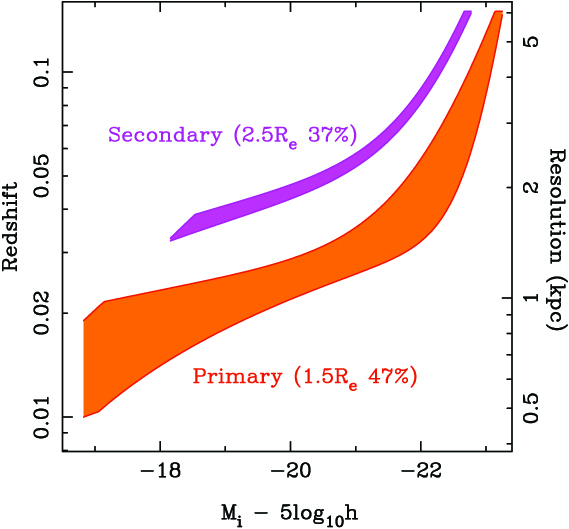 This completeness cut is also applied to the Secondary sample and the Color-enhanced supplement described below.

The Secondary sample was designed to have a higher density of targets than is required to give the desired 2:1 ratio of Primary+ to Secondary galaxies. Therefore, before allocating IFUs (see below) we random sample the Secondary sample to the desired target density. Due to a very recently discovered bug in the target selection code this random sampling is not truly random and in fact samples in such a way as to make the number density distribution flat as a function of stellar mass. This is a small change, since the density distribution was already quite close to being flat with stellar mass, but does have some consequences when calculating the appropriate weights to apply to the Secondary sample (see the weighting FAQ and Wake et al. in prep for more details). Secondary targets passing the random sampling have RANFLAG = 1.

Secondary targets that aren’t included after random sampling (RANFLAG = 0) can be allocated IFUs but only as filler targets if no other targets are available. As a result these filler Secondaries are likely to be a biased sampling of the full Secondary sample, for instance they are likely to be preferential selected for lower density regions.

The Color-Enhanced supplement fills in poorly sampled regions of the NUV-i vs Mi color-magnitude plane such as low luminosity red galaxies, high luminosity blue galaxies and “green valley” galaxies. It is constructed by expanding the Primary sample upper and lower redshift limits in underpopulated NUV-i vs (Mi-5 log10 h) bins. As for the Primary sample the goal is to cover the galaxies to 1.5 Re.

One of our requirements is that the selection will be unbiased with respect to environment. This means that we should not choose to ignore a region where we have fewer galaxies than IFUs. It also means that we need to overlap tiles in denser regions on the sky to achieve similar completeness in dense environment as in voids. To achieve this we use an adaptive tiling routine that uses a ‘gravitational’ method to assign multiple overlapping plates to the densest regions. The method starts with an evenly distributed overlapping tiling. The target galaxies then ‘pull’ tiles as an $1/r^2$ law, with the mass of already assigned targets set to zero. The velocity with which the plates are allowed to move is damped to prevent oscillation of the tiles and a mild repulsive force between the plates is included. This has the effect of pulling plates towards the over dense regions and away from the voids. Currently only tiles with $>$ 7 targets are included in the final tiling.