The SDSS-III APOGEE-1 and SDSS-IV APOGEE-2 surveys were enabled by a pair of custom-designed near-infrared spectrographs. A brief description of the spectrographs is given on this page. A detailed description is given in Wilson et al. (2019).

APOGEE-1 and APOGEE-2 constitute a high-resolution, near-infrared spectroscopic survey of several hundred thousand stars in the Milky Way Galaxy. Spectra are observed with custom-built, multi-object spectrographs, which record the spectra of 300 targets simultaneously across the H-band wavelength regime with an approximate resolution of 22,500.

The first APOGEE spectrograph, APOGEE-N, was designed and constructed by a team of institutions and vendors led by the University of Virginia. It is situated at the Sloan Foundation 2.5-m Telescope at Apache Point Observatory and was commissioned in August 2011 during the SDSS-III APOGEE-1 Survey period. The second APOGEE spectrograph, APOGEE-S, had a similar build process and is almost a twin of the first. It is located at the 2.5-m Irénée du Pont Telescope at Las Campanas Observatory and was commissioned two and half years into the SDSS-IV APOGEE-2 Survey, during February and March of 2017.

For both APOGEE-N and APOGEE-S, light is transmitted from the telescope focal plane to the pseudo-slit within the cryogenically cooled instrument via 300 low-OH ("dry") fused silica fibers which have a 2$''$(N)/1.3$''$(S) field of view on the sky. Each of the 300 fiber runs consist of fiber assemblies connected in series. A 2-m fiber run (so-called "fiber harness") goes from the plug plate to a "gang-connector" at the bottom of the plug plate cartridges, which are mounted to the telescope. Multiple cartridges are used throughout the night to observe different parts of the sky and each cartridge has its own set of 300 fiber harnesses. The innovative gang-connector allows the simultaneous connection of all 300 fibers from a specific cartridge to the single set of fibers ("fiber link") that transmits the light from the telescope and cartridges into the spectrographs. To avoid throughput losses from the use of another fiber coupling, the fibers are fed through an epoxy-sealed vacuum feed-through without a break at the cryostat wall. Lastly, the ends of the fibers that make up the fiber link terminate at the instrument pseudo-slit inside the cryogenically cooled instrument. This pseudo-slit forms the "object" of the spectrograph. The job of the spectrograph optics is to reimage the fiber tips, whose light is dispersed by gratings, onto detectors that record the spectra of the survey targets.

Diagram of the APOGEE-North gang-connector system (fiber routing and the 300-fiber gang connector) which allows for a facile change of the fiber connections between the instrument and the various cartridges. Figures courtesy of J. Wilson

An 'uncorrected' Schmidt camera, used in reverse, collimates the light of each of the fibers. The fiber tips are carefully positioned on a curved pseudo-slit and the pseudo-slit and spherical collimator have a common center of curvature near the system pupil which is also the approximate position of the spectrograph grating. The design is on-axis so the pseudo-slit is an obscuration in the collimated beam. Two-fold mirrors are used for efficient packaging of the optics train within the cryostat.

Schematic of the instrument optics. The schematic displays the relative positioning for the key spectrograph elements. Figure courtesy of J. Wilson

The dispersive optic is a transmissive 3-panel mosaic Volume Phase Holographic (VPH) grating fabricated by Kaiser Optical Systems Inc., the first-ever of its kind deployed in a cryogenic astronomical instrument (note for APOGEE-S, there is a slight departure in that the VPH is 2-panel). Due to its size, the grating area of the VPH was recorded in multiple steps (panels) and then processed and capped as a single unit. A 6-element refractive camera fabricated by New England Optical Systems focuses the various wavelengths of light onto the detectors. The camera is composed of mono-crystalline silicon and fused silica elements, the largest of which are nearly 400 mm diameter. Three JWST H2RG near-infrared detectors, on-loan from the University of Arizona, are mounted side-by-side to record the blue, middle and red portions of the spectrum. An Astronomical Research Camera (so-called Leach) controller operates all three detectors in sample-up-the-ramp mode.

While the nominal full-width half-maximum is approx. 2.3 pixels wide, the blue end of the spectrum is sampled with less than 2 pixels. To recover optimal sampling, the detector mount is translated (spectrally dithered) between sets of frames with a custom, precision single-axis actuator. For further details regarding the APOGEE spectrographs, users should consult Wilson et al. (2019).

General Characteristics of the Northern and Southern Spectrographs

The APOGEE mosaic Volume Phase Holographic (VPH) grating is installed during instrument assembly at the University of Virginia.

The 2-ton APOGEE instrument is lowered to the concrete pad in front of its room in the warm building next to the telescope at Apache Point Observatory.
Back to Top 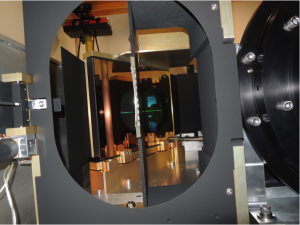 A view inside the APOGEE-South instrument looking towards the pseudo-slit. The VPH grating can be seen in reflection focused on Fold Mirror 2. The Camera barrel is to the right. Photo courtesy of J. Wilson.

The APOGEE-South instrument in its dedicated room at the du Pont Telescope at Las Campanas. The room was previously the darkroom used for the processing of photographic plates. The instrument sits on a base-isolation system that mitigates motion during earthquakes. Photo courtesy of J. Wilson.
Back to Top